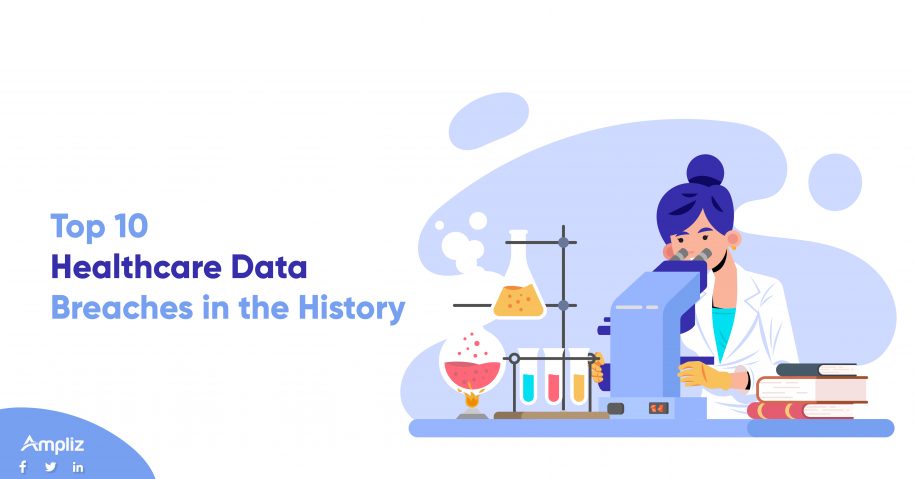 Looking back to five years from now, there has been tremendous growth in the frequency and size of healthcare data breaches. Almost 80 million people were affected due to the largest breaches. Information that is highly sensitive, such as names and addresses, social security numbers, to data, regarding one’s health, which includes health insurance information, Medicaid ID numbers, and the medical history or records of a patient, are exposed through healthcare data breaches.

The motive that hides behind the cyber attacks on hospitals, pharmacies, care clinics and health insurance companies, are very clear. It is done to acquire, one could say “juicy details” could be used for identity theft. It is widely regarded that the healthcare industry has a little weaker security than any other industries. A report from the Security Scorecard places healthcare in the ninth position out of all other industries, in terms of rating the overall security.

It came as a massive challenge for the healthcare industry to promise cybersecurity in the year 2020, when all the organizations and companies worked to combat the crisis during the Covid-19 pandemic. It was simultaneously being knocked with targeted attacks on cyber security. These led to the biggest recent healthcare data breaches.

In 2017, a survey from the month of February, held by Accurate, stated that healthcare data breaches affected 26% of consumers from the US. It also found out that 50% of the total breach victims gradually faced medical identity theft, with a total loss of $2500.

Nearly, almost everyone has healthcare data records, within the healthcare system. The threat landscape changes itself with the upcoming years.

Listed below are the top 10 biggest healthcare data breaches with all the information which were eventually exposed.

In January 2015, it was historically a bad time for healthcare data. In the largest healthcare breach till date, and hopefully ever, Anthem stated on January 29 that 78.8 million records of the patients had been stolen. The cyber attack consisted of data which were highly sensitive. It included names, home address, social security contact number, dates of birth, and many such other information. The victims were mostly health plan members at Anthem, although some among them were non-members, because Anthem handled paperwork for various independent insurance organizations.

Excellus, in 2015, discovered a massive cyber attack that exposed the private information of approximately 10 million members. After the back-to-back attack taking place in the same year, Excellus went for a forensic review. They discovered it to be the third largest healthcare data breach in history. It involved financial information, medical data and social security numbers.

The Science Applications International Corporation (SAIC) announced that 4.9 hospital patients and military clinic were affected due to a data breach, in TRICARE, which is a military healthcare provider of the federal government. The data was stolen from the car of an SAIC employee. There was no involvement of financial data, but information such as phone numbers, social security numbers and home addresses were exposed.

UCLA disclosed another data breach in the mid-year of 2015. It stated that the hackers had hacked 4.5 million patient’s records. UCLA, mentioned that it did not have its patient’s data encrypted, which made the situation worse.

Community Health System, which handles 200+ hospitals throughout the US, stated a very major healthcare data breach that affected 4.5 million patients. The breach affected all the people who received treatment in any one CHS’s hospitals.

Advocate Health Care stated that in 2013, they faced several data breaches which involved computer theft and revealed unencrypted medical records and personal information of 4.03 million patients. In 2016, August, the Advocate agreed to pay $5.55 million in order to settle for a lawsuit which was related to the breach.

Medical Information Engineering, which creates EMR softwares, declared a data breach, which affected 3.9 million patients and 11 healthcare providers. The patients, who were affected, received notice where it was mentioned that their names, phone numbers, diagnosis and other sensitive information were stolen.

Newkirk products announced a breach in the data which victimized almost 3.47 million patients. The hackers not only gained access to primary care information but also premium invoice information, names, Medicaid ID numbers, group ID numbers and many other sensitive information.

These were the biggest healthcare data breaches recorded in the history of the healthcare world. And if you want to share more of this with us, do leave your message without any hesitation.

To gain such useful insights on the healthcare industry, its latest trends, and thefts, do visit our blogs. Do not miss to explore our Contextual Healthcare Intelligence Platform that delivers the best high potential and customized healthcare data to clients from all over the USA and the globe as well. To know more in detail, visit Ampliz or reach out to our data experts at [email protected].