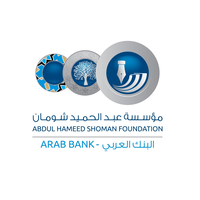 Established by the Arab Bank in 1978, The Abdul Hameed Shoman Foundation (AHSF) is non-profit institution dedicated to nurturing ... creativity, promoting knowledge and achieving economic and social sustainable development in the Arab World. AHSF playS a vital role in enriching the Jordanian and Arab cultural and scientific scene through its various entities, programs and activities such as: - The encouragement of the work of scientists, teachers and writers through publishing their work and awarding annual prizes as means of empowerment. In addition, AHSF supports young scientists through "Abdul Hameed Shoman Fund for Supporting Scientific Research” - The Abdul Hameed Shoman Cultural Forum was established in 1986 to give due attention to wider public and provide a free platform for renowned scientists, thinkers, educators and innovators to debate their ideas through weekly lectures and seminars. - The Cinema hall, launched in 1995, screens thoroughly chosen movies from the classics to the modern and experimental film genres. - The Abdul Hameed Shoman Library was established in 1986 as the first well-equipped and fully computerized public library in Jordan. The Library helped establish 13 libraries around the Kingdom. - AHSF supports local and Arab cultural initiatives and institutions that contribute to the advancement of the cultural and scientific scene. AHSF is currently developing new youth and community economic opportunities and sustainable development projects Show more

Abdul Hameed Shoman Foundation is in the industry of: Research,Civic & Social Organization

How many employees are working in Abdul Hameed Shoman Foundation?